3 of our favorite campaigns that never saw the light of day. 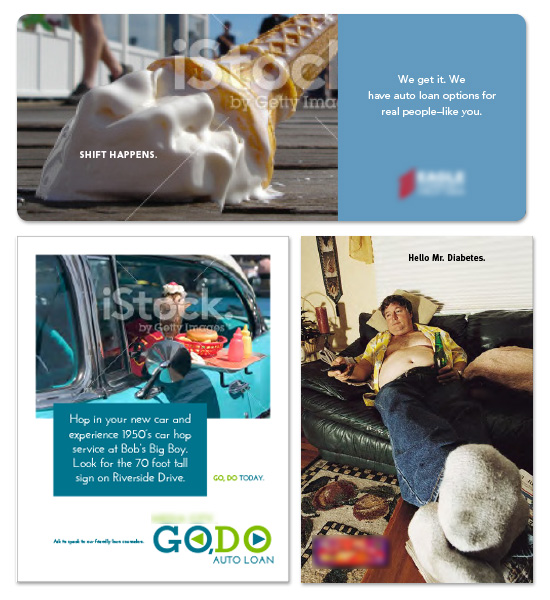 In all our years in this business, we’ve never posted – let alone compiled – our campaigns that bit the dust. Due to social anxieties, raciness or a second, better campaign, these were never produced. But here are our favorites from this year.

This campaign was concepted for a local bank who had an auto loan program targeting people rebuilding credit or with no credit. The idea behind the concept was that “Shift happens to all of us and we get it. We have auto loans for real people, like you.”

The ads feature an upside down ice cream cone on the ground, a dropped and cracked iPhone, a stained dress shirt and an expired parking meter – all with the headline “Shift happens.”

Ironically this is another auto loan for a local bank in Burbank. They were featuring a super low interest rate and 90 days of no payments. The concept for the campaign was centered around all the things you could go do in the neighborhood with the money you’d be saving and without having payments for three months. Because of their singular branch and their long-standing residence in Burbank, the idea was to be hyper-local and support the businesses and sights in Burbank.

These ads highlighted local haunts like the iconic Bob’s Big Boy on Riverside Drive, the local Farmer’s Market and the Starlight Bowl, among others.

This is an example from a few years ago but we had to include it since it’s one of our all-time favorites. This campaign titled “Bad Choices” was concepted for a functional foods manufacturer that created meal replacement bars specifically for people suffering from Diabetes and Heart Disease,

The ads directly address Americans’ inability to make good food choices for ourselves. Images like a cigarette in a sunnyside up egg and an obese man sitting on a couch drinking a beer are meant to shock a grab attention.

You Had Us
At Hello

Let’s get the conversation started.
We’re all ears. And in Robert’s case, beard.

For the latest ideas from your favorite enablers, sign up here.