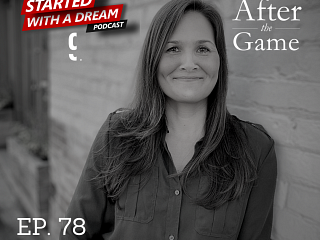 Recently, Idea Enablers’ Michelle Ruzzi was featured on the NinePoint Magazine podcast talking about how her athlete mindset has helped her in business and in life.

In episode 78, of The 9INE POINT Started With A Dream Podcast, Jacolby Gilliam talks with Michelle Ruzzi former Chapman University basketball player, Co-founder of Idea Enablers, and highlighted athlete in The After The Game documentary about her journey. In this episode, Michelle shares a lot about how the same traits and mindset she used as an athlete she still uses daily in her life after sports.

For Michelle, the journey was not easy. As a 5’2″ point guard she faced several moments when she thought about quitting but she pushed through to avoid looking back with the what if’s.

Michelle’s athlete mindset of not giving up, leadership and persistence serve her today as she is a co-founder of a marketing agency. There is a lot of value to gain from Michelle’s journey that can be watched in April Abetya’s upcoming documentary After The Game. The film follows three women apply lessons from their 1999 college basketball season to tackle adult challenges 20 years later.

Connect with Michelle Ruzzi and get involved with the After The Game film at the following links below.

Listen to the episode on iTunes or Spotify.

You Had Us
At Hello

Let’s get the conversation started.
We’re all ears. And in Robert’s case, beard.

For the latest ideas from your favorite enablers, sign up here.